The Inn at OxBow Acres, LLC

Earlier this month, my youngest son and I went on a class trip to Washington, DC. In a whirlwind week we visited 14 monuments and museums and walked over 30 miles in four days. However, there was one stop where a young soldier marched just as many miles – not to see the magnificent architecture and fascinating displays with his friends – but to pace. In a single line. In silence. In reverence. In respect.

We had come to watch the changing of the guard at The Tomb of the Unknown Soldier. After 21 steps (signifying a 21-gun salute), this stoic young Sentinel would click his heels, pause for 30 seconds, turn, and proceed once more. As he walked, my mind drifted through memories of my father, uncles, son-in-law, and others. My father was in Guam at the end of WWII; My uncles in Korea and Vietnam. After my father passed away, my mom had dated a kind man who was there in Iwo Jima at the raising of the flag. Rarely did they speak of the buddies lost, but rarely does that memory ever fade.

My older sister was a candy-striper at Rancho Los Amigos Hospital – one of the largest rehabilitation hospitals in the country. As a little girl, I remember when my mom would take me to pick her up from her shift. I stared at battered and broken men – limbs missing and lives shattered – that were wheeled outside by orderlies to get a brief respite from the crowded wards. How many of them succumbed to their injuries while I roller-skated around the surrounding neighborhoods?

The click of the shiny boots would awaken me from my reverie and other scenes passed through my mind. My son-in-law spent many months in Afghanistan, and I remembered the 13 servicemen who perished. They might have been celebrating  Memorial Day with their families this year. How difficult this week will be for those who loved them.

Unknown soldiers in mass graves. How many are being dug in the Ukraine this moment for people on both sides? How many tears are being shed by families around the world?

While Memorial Day is a time to gather and celebrate, we need to remember the cost. If only we could give five minutes of time on Monday to  honor our fallen and another five minutes to pray for peace. Since 1937 the 3rd US Infantry Regiment has protected the Tomb of the Unknown Soldier every day, every hour, in every climate. Let’s guard this sacred holiday. 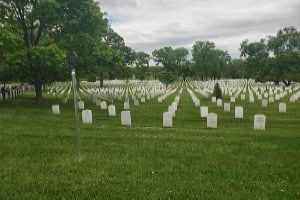